Allan Crossman has had the great pleasure of collaborating with many notable chamber musicians, orchestras, vocalists, actors, directors, playwrights, dancers, librettists, and poets on both the concert and theater stage. His compositions include many commissions and have received special awards and commentary. He was born into an artistic family in New York City in 1942 and worked with George Rochberg, George Crumb, Hugo Weisgall at the University of Pennsylvania, and principal piano studies with Irwin Gelber. 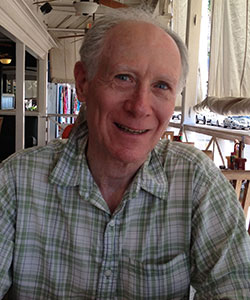 Florébius, violin and piano, was recently released by Parma Recordings, with the Eusebius Duo of San Francisco; Music for Human Choir (SATB a cappella) shared Top Honors at the Waging Peace through Singing Festival in Oregon – with lyrics by the composer, it portrays the vision of humanity’s final departure from Earth, including a “farewell” chorus. Flyer, for cello solo and string orchestra, was written in 2003 for the centenary of the first Wright Brothers flight and premiered/recorded by the North/South Chamber Orchestra (NYC) under Max Lifchitz, with cellist Nina Flyer. It was a featured piece by the Kalistos Chamber Orchestra at the Society of Composers national conference at Denison University. The long association with North/South Consonance (NYC) has produced other fine recordings: Millennium Overture, with Crossman’s wind-string quintet of the same name, received a GRAMMY nomination.

He has been active as composer/music director for theater companies, among them Cambridge Ensemble (MA), Goat Hall (SF), Théâtre Quat’Sous, Centaur Theatre, Playwrights Workshop, Goethe Institute, McGill Players (Montreal). Productions include Blood Wedding, for which he draws on Lorca’s original music and arrangements of Andalusian folksongs; The Comedy of Errors, whose acoustic/digital sound texture is more part of the lighting than a traditional theater accompaniment; Metamorphosis (adapted by Alexander Hausvater), Calling for Help (Handke), and Every Good Boy Deserves Favour (Stoppard), for which he arranged André Previn’s orchestra score for five instruments.

The musical The Log of the Skipper’s Wife was produced by the Royal Shakespeare Company at Stratford and the Kennedy Center, with his music drawn from Irish/Scottish shanties. It also appeared in Montreal, Nova Scotia, Martha’s Vineyard, and at the Camden, Maine Opera House, where Dorothea Balano, the skipper’s wife, saw many operas in the early 20th century; members of her family attended the American premiere. He has music-directed and accompanied many Brecht/Weill productions and was music director/arranger for the popular Canadian musical, Anne of Green Gables, with performances in Montreal and Hong Kong.

His completion of ten unfinished early piano works by Schubert was recorded by Laurie Altman and Danielle Bernstein of Montreal; he devised the soundtrack for the award-winning animated film X Man, (Christopher Hinton, National Film Board of Canada); the concertino, Plasticity, was written for instrument inventor Tom Nunn of San Francisco, whose Sonoglyph combines features of percussion and strings, and the score combines modern improvisation with notated diatonic passages.